Following Heinrich’s visit to me in Leeds, in 2008, to test for dyestuffs on a selection of Chippendale furniture , he invited me to work with him in his laboratory to recreate the dyes. Schloss Nymphenburg is a vast Baroque palace in Munich, Bavaria, southern Germany, where Heinrich lives with his family, within the complex, and enjoys his work in his extensive laboratory and workshops. My dear and late wife, Gloria and I, rented a delightful apartment in the palace grounds. The arrangement was for me to work with Heinrich, for the first four days, while Gloria explored the palace grounds, finding hidden buildings and gardens, plus surrounding places of interest on the outskirts of Munich. Gloria and I started our married life in Schleswig, northern Germany, in 1959, when I was serving in the Royal Air Force, so Germany and its people hold a special place for us both.  It was June, and like the picture below, blue sky was the order of every day during our visit.

The purpose of the visit, for me, was to revisit the findings made on Heinrich’s visit the previous year. The images below remind us of two of the furniture pieces Heinrich tested. On the right is the Lunar table, made for

Harewood House 1775, and now in private collection, and on the left, one of a matching pair of pier tables, held in the music room at Harewood.   I wanted to recreate dyed veneers for each colour identified, and Heinrich’s professional experience and creator of the Spectronomy system he used to identify the colours, made him the perfect teacher. This was, for me, a new area of learning and I was excited at the prospect of working under such a knowledgable man in the most well equipped surroundings.

Here we see Heinrich in his laboratory, mixing ingredients to prepare a ‘mordant’ of Alum. Alum (aluminium potassium sulphate) is perhaps the most common of mordants used in the 18th century. A mordant is a mineral compound used to make dyes stick to the veneers. Without such a substance, a dye would simply wash out of the material being used. Other mordants include iron, tin and copper. We began by soaking small sample of veneers, approximately 30mm square. We used small samples, so they would dry quickly, thus allowing us to complete all processes, in the time allowed.  To produce the full range of colours, we used a mixture of holly and maple veneers, so I could see, where applicable, the different colour contrasts produced between the two species.  Veneers were soaked in Alum, seen below in two (inert) glass containers, and left overnight. 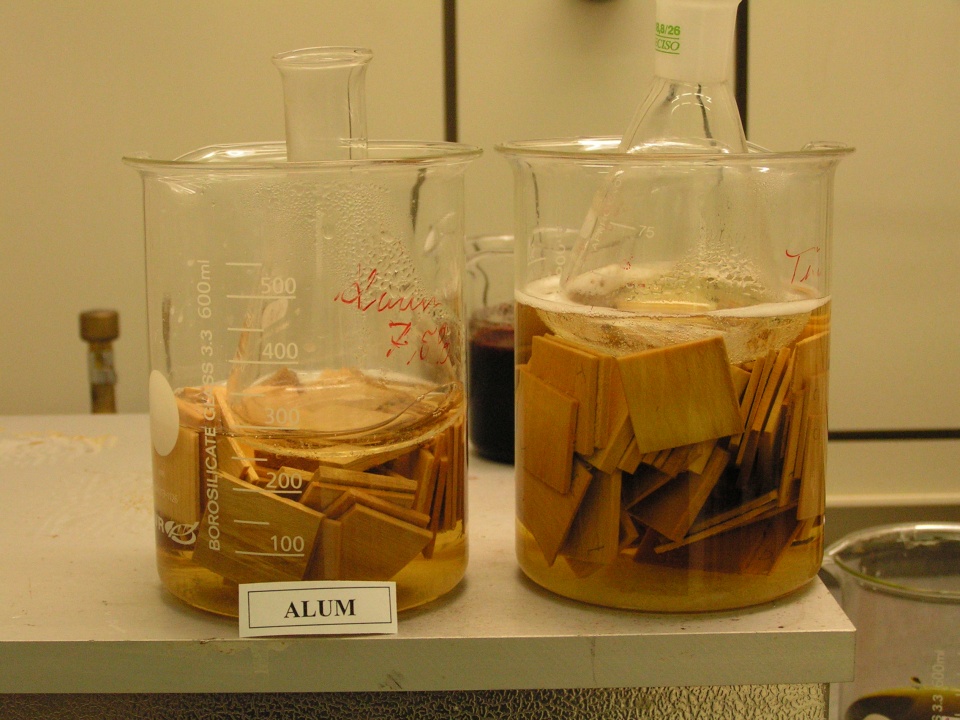 The following day, we started mixing each of the dye colours from their respective raw materials, with Heinrich explaining each process as we progressed, and me making copious notes and taking many photographs during each session. The information will be fully documented in my book, “Chippendale’s classic marquetry revealed” explaining about dyes, mordants and moderators, necessary to provide the correct colour tones and maintaining the acidity balanced (pH) of the components under use. 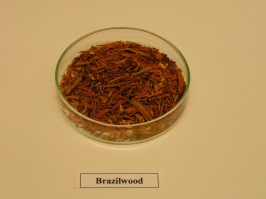 Above left, we see brazil wood chips, taken from the Brazilwood tree, used to dye a red dye, and the result seen on the small veneer sample. Similar processes were carried out, providing me with the necessary background information and subject matter. The processes we produced included the following colours and dyes, red – madder, brazilwood and cochineal;  yellow – berberis, wig tree, weld, fustic and curcuma; purple – campeachy; blue – indigo; orange – kamala; and green – indigo, sulphuric acid, and berberis.  Each of these dyestuffs were identified on Chippendales marquetry, when Heinrich’s analysis was carried on a range of his furniture, in the previous year when he visited me in Leeds, Yorkshire.

During the penultimate day I was invited to give a short talk to Heinrich’s conservation staff , which, at first I thought would be problem with interpretation. To my rescue came a English intern, Joe, (sorry cannot remember her surname) studying under Heinrich, who had excellent knowledge of German. She took my picture slides and accompanied notes from me, and overnight, produced translations of the notes into German. These were handed out to delegates. The picture below shows me during my presentation of Thomas Chippendale classic marquetry work.  It was quite a contrast to the Röntgen marquetry the delegates had grown up with, and the comparative techniques created good discussion. Heinrich had, earlier that week, taken Gloria and I to the Munich Museum to see some of Röntgen’s marquetry furniture.

Following the four days, Gloria and I explored Bavaria by train and coach visiting many castles and houses, which Heinrich maintained as a conservator. The highlight being Neuschwanstein Castle, a nineteenth-century Romanesque Revival palace on a rugged hill above the village of Hohenschwangau near Füssen in southwest Bavaria. The palace was commissioned by Ludwig II of Bavaria as a retreat and as a homage to Richard Wagner. Ludwig paid for the palace out of his personal fortune and by means of extensive borrowing, rather than Bavarian public funds.

The visit lasted ten days in total, and we came home with a great sense of fulfilment and gratitude, and finding a talented scientist, conservator and a lifelong friend.