In the beginning, marquetry life, for me, commenced in 1990. Not even knowing what marquetry was at that time, my late, great, mentor and uncle – Tommy Limmer, took me under his fatherly wing and gave me the greatest lesson of my life. The ‘lesson’ lasted eight years! During that time, he passed on a lifetimes skill and even more personal wisdom. It was a partnership blessed from above, built on love and respect and plentiful laughter along the way. I was 50 years old and in need of a hobby, having taken early retirement as a telecommunications manager with British Telecom. I was always interested in working with wood, so did not take much persuasion from Tommy to entice me down to his workshop below stairs, and only a few miles from my home.

My first marquetry project was a kit supplied by the late Ernie Ives, but at the time editor of the Marquetarian magazine, and a leading expert with the Marquetry Society GB. 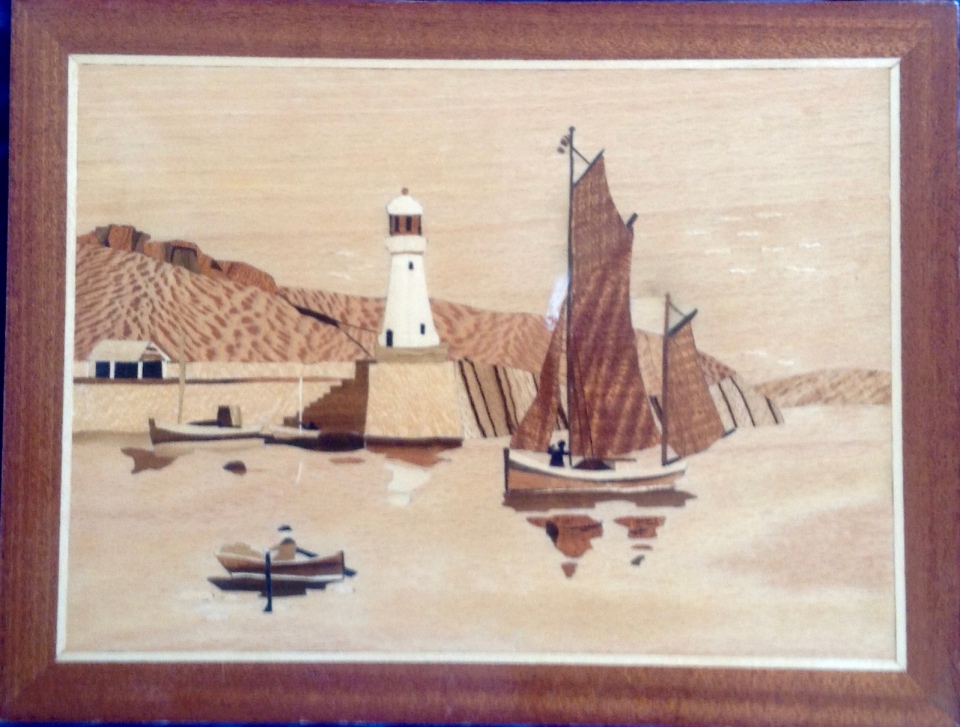 I was totally absorbed in the whole process;- choosing the right veneer, even though the choice came with the kit, I soon began to look at Tommy’s selections and choose a different type of veneer. I realised that I had an aptitude for the work and the craft, and I quickly realised the artistic aspect that went with it. Sadly I am not, and never will be an artist, but I soon realised I had a good eye for recognising the best veneers to represent the artistic content of the picture. It was like finding I had a half-way-house to artistry and that pleased me greatly. Using a scalpel was so rewarding. The tool fit comfortably in my hand and offered such dexterity and precision. I learned how to border and square the picture and glue it to a baseboard, then veneer the back and edges, before applying a polish to get that professional finish.

My next lesson followed, but now using the fretsaw. I was not sure of this tool. A hand-held fretsaw to cut through thin flimsy veneers without them breaking up, seemed almost impossible. I was quickly reminded that the secret of learning is not from yourself, but from a knowledgable and experienced teacher. In Tommy I had both in abundance.

From a recent visit to Sorrento, Italy,  I had returned with a number of blank jewellery boxes waiting to be decorated with veneering and marquetry.  I had also acquired a number of marquetry drawing used by the Italian Marqueteurs to decorate the boxes. I put the two together and came up with this box seen below.

An octagonal jewellery box veneered with Indian burr rosewood, and fretsaw marquetry. Tommy showed me how to saw up the centre of each leaf to create veins, then later fill them with a wood filler to colour the veins. Such artistry I was learning and how to apply it. It was these early projects that shaped the way I wanted to take this craft, because it was the fretsaw that excited me much more than the knife, and I had to find out more about its history. The box now belongs to my son Neil, who is a musician, so the decoration befits his profession.

Those early days, passing into years,  formed the foundations of my passion. A visit to Harewood House around 1994 introduced me to Chippendale’s marquetry furniture, and all it took to point me in the direction, which I have remained in ever since.  The remaining pages of this website speak for themselves, showing the extent of my learning, from those early years in Tommy’s basement workshops, to reproducing Chippendale’s finest marquetry work.