Two matching china cabinets of majestic proportions and truly ambitious marquetry represent the very best of Thomas Chippendales classic statement. The pieces, owned by Viscount Gage and his family, reside at the family seat, Firle Place, Sussex, England. The house is open to the public during the summer season and the furniture collection and history of the house and family 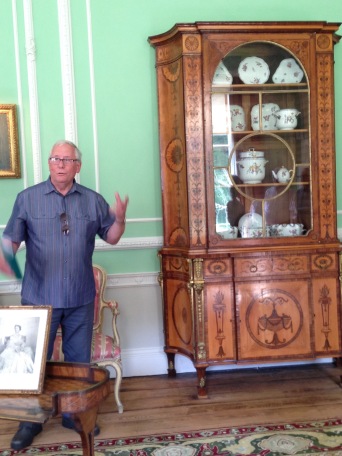 One of the matching pair of china cabinets. Here I provide a short talk on the techniques used to cut and lay the marquetry work.

provide a fascinating incite into English heritage. The cabinets, made c1773 initially for Lord Melbourne at Melbourne House, now Albany in Piccadilly London, subsequently came to Panhanger, Hertfordshire, and eventually ending up at Firle Place where they reside today.  Measuring over 8ft high they represent the tallest pieces of all Chippendale’s known commissions. They were sympathetically restored in 1983 by the late David Hawkins, and today stand as one of the finest pieces in the Firle collection. This year (2016 and seen here) I made a return visit to Firle Place, this time with the Chippendale Society, and on arrival I was invited to give a short talk to the society members, on the techniques used to construct the two identical cabinets. I have, in recent years, studied these china cabinets in much detail, scrutinising both the cabinet work and the sumptuous marquetry.  My thanks  to Viscount Gage, who allowed me access to the large photograph collection amassed by Hawkins during the restoration. The  findings will be given in my publication ‘Chippendale’s classic Marquetry Revealed‘ due for release in time for the Chippendale tercentenary in 2018.  I am grateful to Viscount Gage and the Firle Trustees, for allowing me permission to publish images both in my book and in the picture seen here.